DO NOT PUT ICE ON A MAJOR BURN 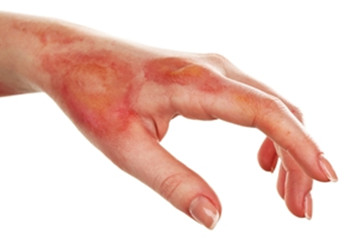 ICE MISCONCEPTION. Written by: TTM There are many types of burns. Burns have been classified traditionally according to degree. First, 2nd, and 3rd degree burns are commonly referred to as a surface burns, partial thickness burns, and full thickness burns consecutively. There is also a variety of causes that include: friction, chemical, radiation, thermal, and electrical burns. Surface burns, like a sun burn, are considered minor except under the age of 18 months or over the age of 65, or if there is severe fluid loss. There are no blisters and little to no swelling. For a small or minor first degree burn the reddened area is immersed in clean cold water or ice cubes are applied with barrier precautions – no prolonged direct contact. This relieves the pain. Even surface burns can be extremely serious if they involve a large area. Death may occur if a 1st degree burn covers as much as 2/3 of the body area. On a child such burns are dangerous on a smaller area of the skin. Partial thickness present with moist blebs and blisters. Care should be taken not to break any blisters. Second degree are considered minor in adults with less than 15% of body surface area affected and in children with less than 10% and severe with over 30%. Areas of the body need to be considered for classification of a severe, moderate or minor burn. The “Rule of 9’s” can be used to determine body area percentage. Full thickness burns are only ever considered minor if over less than 2% of the body, moderate at 2%-10% and severe over 10% especially if caused by chemical or an electrical source. Emergency care at the scene should include the use of cool water. In order to avoid shock no more than 10-20% of an area with major burns (no, not Frank, if you’re a MASH fan) should be cooled at one time. Ice should not be used as the cellular integrity has been compromised and we can flash over from burn to frost bit quickly. Also, the victim should be covered in a clean, preferably sterile, sheet and a blanket is used to cover the unaffected areas to maintain normal body temperature. Respiratory problems are especially likely if the person was burned in an enclosed space or was burned on the face and neck. Singed nasal hairs, darkened oral and nasal membranes, hoarseness and carbon particles or soot in the sputum are indicative of a thermal injury to the respiratory tract. This observation should be reported to 911 immediately upon discovery as this person will most likely require intubation from an Advanced Care Paramedic. If they are conscious and able to swallow, fluids can be given by mouth. Note: Nausea, vomiting, abdominal pain or abdominal distension is a contraindication to giving anything by mouth. Remove clothing from the burned area as long as it is not stuck to the skin. Removed clothing should be sent to the burn lab as it may help determine the chemicals or other substances that either caused or entered the wound.

Better Health Care is Our Mission