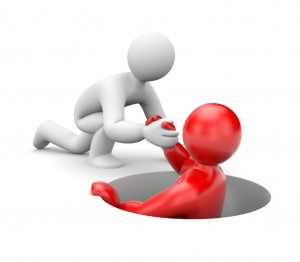 Moving through Fear.Why people, even people with training, will choose not to help someone in an emergency situation.

Bystander syndrome or the bystander effect or the “Kitty” Genovese syndrome is a social psychological phenomenon in which individuals are less likely to offer help to a victim when other people are present. In fact, the greater number of bystanders present decreases likelihood that anyone will help. This is referred to as “Diffusion of Responsibility”. Of course the acumen of this statement varies with culture and setting.

There are a number of factors that effect bystander syndrome such as ambiguity or uncertainty of the various “dangers” involved; real or perceived. Also, group cohesiveness (aka social cohesion) arises when bonds link members of a social group to one another and to the group as a whole. For example, it would be typical that there is a greater social bond to members of a workplace than to the members of a town and greater social bonding to members of a small community than a large community or city. Members of strongly cohesive groups are more inclined to participate readily and to stay with the group.**

Another aspect of the bystander effect is that groups of people that will congregate at an incident will add confusion to the incident and its management. As simple as having the “crowd” cleared, disbanded or at least moved back helps to reduce this confusion, increase responsiveness and aid in the preservation of a potential workplace investigation scene.

Better Health Care is Our Mission